Statement of the UNRC at the Launch of the Awareness Campaign to Combat Trafficking in Persons in Eswatini on Wednesday, 28th April at Nkonyeni Golf Course

Statement of the UNRC at the Launch of the Awareness Campaign to Combat Trafficking in Persons in Eswatini on Wednesday, 28th April at Nkonyeni Golf Course

Honorable Members of the Parliament Excellency,

Ambassador of the United States of America,

UN colleagues and in particular representatives from the International Organization for Migration (IOM),

A very good morning to you all. It is an honor and with the utmost humility that I address you today, at the launch of the national Awareness Campaign to Combat Trafficking in Persons in Eswatini.

Today marks an historical turn in our beautiful nation: one in which we re-commit to protecting and supporting our children, brothers, sisters, mothers, and fathers from the devastating and horrific practice of trafficking in persons. As the UN Secretary-General, Mr António Guterres, reminded us: “Trafficking in persons is a vile crime that feeds on inequalities, instability and conflict. Human traffickers profit from peoples’ hopes and despair. They prey on the vulnerable and rob them of their fundamental rights”. Children and young people, migrants, and refugees, are particularly vulnerable to human trafficking. Women and girls are continuously targeted: all of whom are largely exposed to sexual exploitation, including involuntary prostitution, forced marriage and sexual slavery. Trade in human organs, another horrendous crime, contributes to taking away the precious lives of our most vulnerable populations.

The COVID-19 pandemic has exacerbated the vulnerability of already vulnerable populations, particularly children, youth, migrants, and refugees. Imposed lockdowns and resultant school closures have affected 1.6 billion children and youth around the world, including 350,000 Emaswati learners. A further 5.2 million girls globally are at risk of never returning to education once schools eventually re-open.

This reality is made true by the increasing risk of teenage pregnancies. History tells us that, in times of crises, our girls are danger of sexual violence and exploitation, and their devastating consequences. During the pandemic, living conditions and opportunities for migrant workers worsened as economies halted due to lockdown measures. Restrictions of movement resulted in a loss of income for informal workers, as well as a loss of livelihoods and unemployment for migrant workers employed in the mining, construction, and transport industries.

Health conditions also worsened as migrant workers, irregular migrants, forced migrants and refugees experienced far less access to healthcare than residents. Excellencies, Trafficking in persons thrives in times of crises: it is therefore critical that we continue to fight to protect our most vulnerable populations from such atrocious crimes. Each year, the Kingdom of Eswatini, landlocked country with a small population, loses Emaswati to human trafficking.

For instance, between 2016 and 2018, 50 (but this figure may only be the tip of the iceberg) victims of trafficking were detected - most of whom had been trafficked for labor and sexual exploitation to neighboring countries South Africa and Mozambique. Human trafficking for purposes of sexual exploitation is largely inflicted upon girls and women, fueled by promises of work or education opportunities in South Africa. Along with efforts to address human trafficking in Eswatini, there is a desperate need to strengthen national capacities to detect domestic trafficking, as instances of human trafficking continue to increase across the Southern African region.

The renewed efforts of the Government of Eswatini, in collaboration with the International Organization for Migration (IOM) and partners, reflected in today’s launch of the awareness campaign to combat trafficking in persons in Eswatini, are therefore a pivotal and very commendable step to preventing and responding to instances of human trafficking. As I reflect on today’s significance, I am reminded of the great Chinese proverb: “Give a man a fish and you feed him for a day: teach a man to fish and you feed him for a lifetime.” I would therefore like to take a moment to congratulate the Government of Eswatini, particularly the Acting Prime Minister, for your efforts to equip communities to identify and report Trafficking in Persons cases to the authorities.

Your renewed commitment to support victims of human trafficking and prevent future victims of the crime., will not be done in vain. Excellencies, One liSwati lost to human trafficking is one too many. The United Nations continues to stand in solidarity with the Government of Eswatini in its efforts to overcome Trafficking in Persons, recover better from the COVID-19 pandemic and, in turn, create a “just, prosperous and resilient Eswatini in which nobody is left behind”. 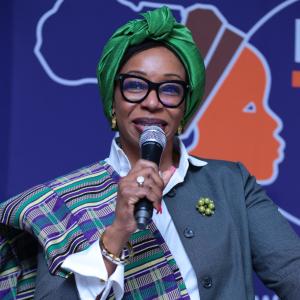 Other entities involved in this initiative